I may have saved a hummingbird today. 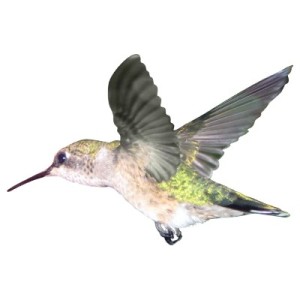 Yeah, I know, it’s not like Angelina Jolie and Madonna saving orphans in Africa, and nowhere as good as Al Gore saving the planet (if it’s not too late for that).  But I try in my small way to help out wherever I can.

We have two inside cats and four outside cats.  Three of the outside cats we “inherited” when we bought this place two years ago.  The previous owners were moving to smaller digs while waiting to build a new house and couldn’t take their cats with them.  So, in addition to the one inside cat we already had when we moved in, now we had a total of four.

Then we found two kittens in a culvert alongside our road out here in the country and our cat population soared to six.  One of the kittens, Culvey, we brought inside to keep the inside cat company.  Roadie, the other foundling,  is more of an outdoorsman.  He sleeps in a room off the carport and has become fat and lazy.

I stepped out the door this morning and was horrified to see Roadie standing there with a live bird in his mouth.  It only took a second to realize it was a hummingbird.  We have feeders right outside the back door, but they’re up high and not close to anything a cat could climb upon to become a predator.  Either he caught one that had flown into his bachelor pad or this one was somehow disabled and he caught it on the ground.

I immediately grabbed Roadie’s head and pried his jaws apart.  The hummingbird took off, rather shakily, and proceeded to crash into the side of my husband’s truck.  Roadie was on him like white on rice.

Again, I grabbed the cat and opened the Jaws of Death.  This time, the bird fluttered off into the field on the other side of our driveway.  I couldn’t see where it landed but hoped that if it was going to die, at least it would be able to accomplish that in peace and not between the teeth of a well-fed feline.

I put Roadie’s food out for him but he was too hopped up on the taste of hummingbird to be interested in it.  Somewhere deep within him an ancient, dormant gene had kicked in and, in his mind, he was on the African savannah where those pesky hyenas had tricked him out of his wildebeest prey.  He paced about like Scar in the Lion King.

I went inside to see to the other kitty critters and to fix breakfast for us human critters.  While I was doing that, I glanced out the kitchen window and saw Roadie sitting on his haunches in front of the carport.  He looked like a fat Buddha toying with an object on the pavement.

Damn!  It was the hummingbird.  He’d gone out into the field and used his own version of a “CAT scan” to locate the poor creature.  At least it wasn’t in his mouth.  I was positive the little thing was dead by now.

I ran out again and snatched it away from Roadie before he had a chance to pop it into his mouth one final time.  I brought it inside and stood there examining it to see how close to death it was.

It was so tiny and beautiful, an older chick or maybe young adult, with iridescent green feathers on its back.  Some of the feathers on its underbelly came off in my hand and I couldn’t believe how impossibly small they were.  It was breathing very fast and blinking its eyes.  Since it was lying on its side a bit, I could feel the eye on that side open and close on my palm each time it blinked.  I shook my head.  How can something so fragile like that even exist in this world?

It appeared there was something sticking out from the side of its beak.  I was afraid it was its tongue and that it had been torn or damaged somehow from the struggle.  Since I can’t see anything up close anymore without some sort of magnification, I fetched one of the many pair of reading glasses I keep stashed about the house in strategic locations.  Upon examination, I found the thing sticking out was a dessicated ant attached to the bird’s tongue.  Though dead, it had a really strong grip, but I managed to pull it free.  Okay, now what do I do with my little feathered charge?

I gently stroked its back and saw there were no broken bones or blood, as far as I could determine.  It had calmed down a bit and was regarding me with its blinking black eyes.  I should put it outside somewhere so it would have some chance at recovery.  But where?  Everywhere you turn outside there’s a cat.  I certainly didn’t want to take it out to Roadie’s side of the house.  “Scar” was too juiced up and on the alert for me to put one over on him now.

I went around the north side of the house where there’s a patch of morning glories spreading alongside the wall.  I figured it would be out of the sun (today’s supposed to be 101) and away from curious kitties.  I tucked him in among the leaves and hoped for the best.

After I had a quick breakfast, I couldn’t help but wonder how he was doing and whether he’d been discovered by one of the prowling predators outside.  I went around the side of the house and found him in the same spot, but now, there were FIRE ANTS circling about like Indians around a wagon train in a western movie.  Oh, crap.  I can’t let that happen.  Fire ants are horrible little bastards.  If their scouts discovered the hummingbird, they would engulf him in very short order and that would be it.

I plucked him out of the morning glories and felt him try to grasp my fingers with his tiny little feet.  He felt stronger to me, but I knew he needed to eat something soon.  Hummingbirds have such a high metabolism and no telling when he ate last.  I took him around to the feeder, watching out for Roadie all the while, and placed him on one of the perches.

He grasped it somewhat weakly and wobbled a little as the breeze ruffled his feathers.  I was afraid either he would fall off or just sit there and not be able to feed.

Then, seconds later, he suddenly took off from the perch, zoomed past my head and flew with strength and assurance high above the treetops and disappeared from sight.  Wow…..I clapped my hands with glee.

One thought on “And Now, For Something Completely Different….”