Well, the Texas Nationalist Movement had themselves a big rally at the steps of the capitol in Austin, boy howdy, and really fanned the flames of the fire that Gov. Goodhair (Rick Perry, to the un-initiated in Texas politics) set ablaze with his talk of secession back in April.

Upwards of 200 wingnuts, er…make that patriots, showed up, by dogies!

They’re part of what is known as the “tenthers”.

Not familiar with this particular brand of insanity?

This from Ian Millhiser of The American Prospect website:

“These efforts are all part of a movement whose members are convinced that the 10th Amendment of the Constitution prohibits spending programs and regulations disfavored by conservatives. Indeed, while “birther” conspiracy theorists dominate the airwaves with tales of a mystical Kenyan baby smuggled into Hawaii just days after his birth, these “tenther” constitutionalists offer a theory that is no less radical but infinitely more dangerous.

Tentherism, in a nutshell, proclaims that New Deal-era reformers led an unlawful coup against the “True Constitution,” exploiting Depression-born desperation to expand the federal government’s powers beyond recognition. Under the tenther constitution, Barack Obama’s health-care reform is forbidden, as is Medicare, Medicaid, and Social Security. The federal minimum wage is a crime against state sovereignty; the federal ban on workplace discrimination and whites-only lunch counters is an unlawful encroachment on local businesses.”

This from the Texas Observer:

One speaker at the event, gubernatorial candidate Debra Medina, explained that the people at the rally were aware of the consequences of pushing for secession. “We are aware that stepping off into secession may in fact be a bloody war,” said Medina. “We are aware that the tree of freedom is occasionally watered with the blood of tyrants and patriots.” When some secessionist began arguing with pro-health care reform activists, another speaker, Larry Kilgore, was heard telling them, “Go back to the U.S. where you belong.”

So, let me get this straight.  If Texans do happen to vote to secede from the union, does that mean all the fat-assed people I see at our supermarket will be turning in their Medicare cards and paying for their own healthcare from now on?  And, if there is no Social Security, will Grandma be moving in with the kids because she can’t afford to live on zero income?  Also, will these folks be repaying all of the money they took out of this “unjust” system for years and years?   Just askin’…..

What the new map of the United States of America would look like: 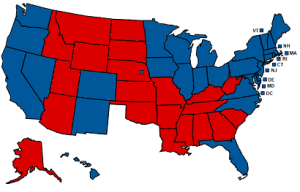 What the new Texas/Oklahoma border fence will look like: