One of our inside cats, Culvey, has been scratching at his ears on and off lately.  That can mean only one thing:  the return of the dreaded ear mites.

He had them pretty badly when we first rescued him from the culvert on the side of our road where he’d been dropped off by some uncaring  people a couple of years ago.  His brother, Roadie, also was quite ill with feline rhinotracheitis, the kitty version of a bad cold or the flu.

After neutering, several rounds of immunizations, mega doses of amoxicillin and approximately $400 in vet fees, the boys were cured and had a loving home.

This I can say assuredly:  there is no such thing as a “free cat.”

From time to time Culvey has needed to be dosed with ear drops to control the return of the ear mites.  I’ve found that the kind you can get at the supermarket from the Hartz Mountain company seem to be just as effective as the ones the vet used.  So when he started going after his ears a little too often, I knew it was time for Doctor Mom to make a house call.

Culvey is getting pretty cagey about the whole thing, though.  I’ve done it enough times for him to know my modus operandi for ear mite medicine.

After I’ve located my reading glasses, I usually have the open ear drops tube and a tissue at the ready.   My operating table is the rug in the kitchen where the light is good and I can see what I’m doing.

Today, when Culvey saw the tube and tissue in place on the rug, he took off running and had to be captured before I could do the deed.

The procedure calls for me to straddle Culvey so I can hold him securely between my legs so he can’t go backward or forward very easily while I fold one ear back at a time to get the drops in.  This is being attempted while I have a vice-like grip on his head with my one free hand.

He’s a pretty big cat now and it was a lot like Wrestle-Mania for awhile there on the kitchen rug until I could get him to hold still long enough to put the right dosage in and then massage the ear.

No body slams or chair throwing, but a struggle just the same.

Now, here’s what the back of the medicine package looks like.  (Notice the calm, smiling cat who’s sitting upright and relaxed, allowing his owner to easily and gently put the drops in his ear.)  Uh huh.

That cat doesn’t exist.  If anything, the cat that modeled for this illustration had been freeze-dried beforehand and can now be found gracing the top of some little old lady’s television.

I would love to hear from you if this is, indeed, how it goes in your house when you’re dosing your cat (or your dog) with medicine, be it drops, pills or liquids.  Any pet war (or horror) stories along those lines are welcome too.

Culvey is giving me a wide berth today, post ear mite control.  I’m sure, if he could, this is what he’d be doing in retribution: 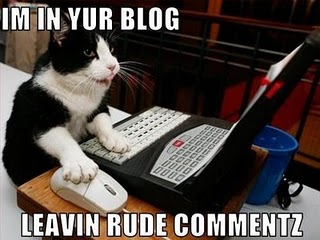 16 thoughts on “The Mighty Mite–or–Ears to You”