A little over ten days ago, my beautiful Himalayan cat, Neferkitty, suddenly became ill in the evening and died by the early morning hours of the following day.

She had shown no signs of an impending illness.  Always a quirky cat, she would pick a different spot to sleep every few days; sometimes behind my computer screen, or under the bed, or wherever suited her fancy of the moment.

So when she started sleeping on the tile floor behind my bathroom door, I didn’t think much of it.

But when I saw her wobbling, unable to keep her hind legs underneath her, I knew she was in trouble.  Of course, the vet’s office had been closed for hours, so I could only pray she would hold on until morning.  But as the night wore on, I knew that wouldn’t happen.

I spent the hours from 11:00 until 2:15 lying next to her on my bed, petting her and telling her how beautiful she was and how much I loved her.  Then, she took her last breath.  I listened to her chest as her heart slowed down, became erratic and finally was stilled.

I had never known a more affectionate cat.  Some would say demanding.  You could pet her all day until her hide became raw and that wouldn’t be enough attention.

Neferkitty epitomized feline beauty too, which, I’m convinced, was her undoing.  Himalayan and Persian cats have been bred and inbred to create their particular characteristics, such as the flat face and shortened nose.

But they also have a tendency for genetic conditions like cardiomyopathy, which can lead to heart failure.  My guess?  That’s what finally caught up with her at the age of approximately ten years.  I don’t know for sure.  All I know is, I felt bereft.

We still had Culvey, our other inside cat whom we had rescued from a culvert in the road at the age of six months.  Our old Toy Fox Terrier, Spunky, had shuffled up them Golden Stairs back in January at the age of sixteen.

Culvey is a great cat, but not uber-affectionate and I really missed that.  After about a week of living with the huge void left by Neferkitty’s passing, I decided maybe I should go to our local SPCA (a no-kill shelter) and check out their cats.

I went back a couple of times and, although I spent time with some very deserving kitties, none of them struck the chord in my heart Neferkitty did.

After Spunky died, my husband and I both said “No more dogs!” because we’d certainly had our share over 36 years of marriage.  Almost all of them either came from shelters or had been dumped off on our property, taken in by us, and given a loving home.  We always said there must be an invisible sign outside our place saying:  “Suckers for Dogs Live Here.”

But, cats are much easier to take care of, what with their independent nature (not to mention their litter box skills.)

Culvey had been visibly depressed with both of his housemates now gone, and I think he secretly enjoyed having Spunky around to watch and stalk.  So, I thought “Hmm, maybe another Chihuahua…”   I never imagined I’d own one of those bug-eyed critters, but we’ve had three of them.  They’re just personality kids, with a capital “P.”

When I saw him at the shelter, all the other little dogs showed off by leaping and barking, but Kelso, a blonde long-haired Chihuahua,  just rolled over in his doggie bed and offered up his belly for a rub.

I still get teary-eyed when I think about all the love Neferkitty gave me and how much I miss her beautiful self, but I know Kelso needs me as much as I need him.

And the void has become a little less deep. 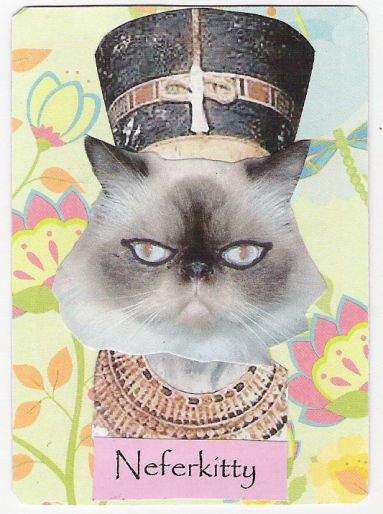 One of many artist trading cards Neferkitty inspired. 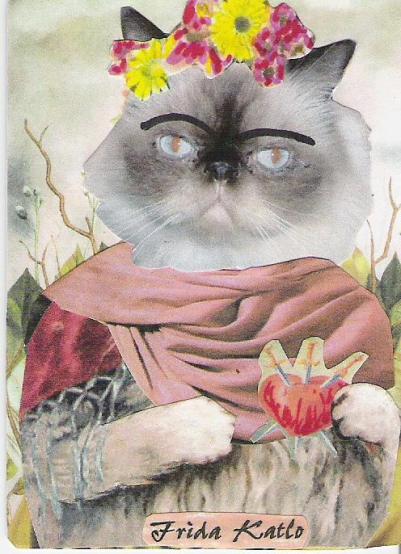 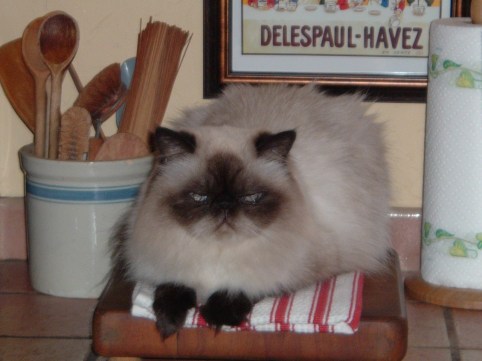 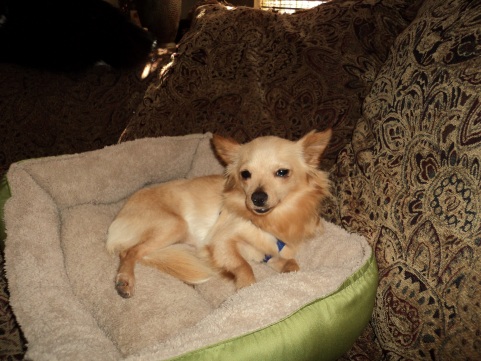 Kelso on his first day home.

15 thoughts on “Farewell to My Muse” 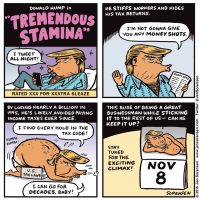