From Politico, by Thomas E. Ricks:

So I think that McMaster should step down—not just for his own good, but for the good of the country. What if he is replaced by a right-wing extremist who operates on an alternative set of “facts”? So much the better, I say.

Here’s why: The saving grace of Donald Trump as president is his incompetence. He knows almost nothing of how the federal government works. He seems to have been repeatedly surprised by the checks and balances written into the Constitution by the Founding Fathers. And he seems uninterested in learning.

Effectively, we have no president. Rather, we have someone who plays the president on television and on Twitter. Aside from a few of his pet subjects, such as immigration, Trump seems to have almost no effect on the workings of the federal government. What we have seen is a demonstration that it is actually a fairly robust establishment. On Iran policy, for example, Defense Secretary James Mattis seems to chug along by himself, pursuing an approach that is basically a somewhat more aggressive version of President Barack Obama’s policy. An ideologue likely would be as ineffective as national security adviser as Trump has been as president, and that wouldn’t be a bad thing.

In my revised view, the less control Trump has over the federal government, the better. Think of it this way: Which would be more dangerous, a Mafia family overseen by the cruel and competent Michael Corleone, or one led by his ineffectual brother Fredo? So, I say, Let Donald be Donald. 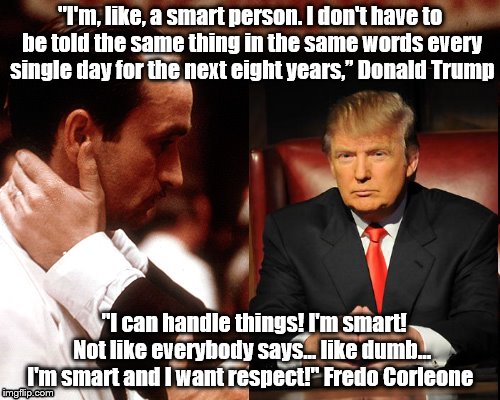 One thought on “Let Donald Be Fredo…er…Donald”