The Amazon is burning. Darkness covers São Paulo at noon. The economy is wilting. The Federal Reserve chair dreamed of seven lean oxen, and when he awakened, all his yield curves had inverted. Sean Spicer is on “Dancing With The Stars.” Do not think that these are signs that we drift, alone, through an indifferent universe, where everything is absurd and nothing is funny. Do not mistake these omens. All has been revealed.

Glorious news, everyone! Donald Trump is God! Everything makes sense now, and the final purpose of all things is at last clear. Donald Trump on Wednesday proudly quoted a messenger who said he was “the second coming of God,” and he described himself as “the chosen one,” looking up at the sky. As I said, wonderful, good, normal news!

How did we not recognize it before? He can multiply crowds at a wish. He can make the night day and the day night. He can make Melania Trump appear in a window where she is not. He can make friends enemies and enemies, friends. He can stare unblinkingly into the sun (at an eclipse, no less), for the sun shall not strike him by day. He turned Chris Christie into a pillar of salt; his arrival was heralded by a burned-out Bush. With Trump, all things are possible. Don’t give him a baby to cut in half; he’ll do it.

*water across the nation transforms into Trump-branded wine*

Hearken, nonbelievers! Of course Donald Trump is the Chosen One — all relevant tropes apply. He arrived on the scene with no particular expertise, and suddenly, he was in charge of everything, even though there was a woman right there who had been preparing for the same thing for decades. He just stepped into office, and suddenly he could do anything he set his mind to. He can wield nuclear power, melt ice that has been there for decades, and he almost bought Greenland.

*Donald Trump vanishes into the wilderness for 40 days and 40 nights; he is golfing*

Also, he is the King of Israel. Great! And he brought Christmas back. Even better! That was just the first sign of many signs that he would perform. He made the lion lie down with the lamb, and then he stood with the lion after the resulting incident. He healed the nation’s wounds (or will, once he gets a magic and only somewhat habit-forming spray from Johnson and Johnson), and you should see what he can do with the jawbone of an ass! And he suffered the little children to come unto him. At any rate, they suffered.

*Trump smites a rock with his rod, and lead-tainted water starts pouring from it*

No wonder evangelical voters have stuck with him so much. He is literally the Messiah! Which is great! Just great, just absolutely wonderful, and a HIGHLY normal thing for a president to say! Definitely not Fake News, definitely the Good News.

Just super, absolutely, terrifically, the most reassuring news ever! I for one am EXTREMELY REASSURED. 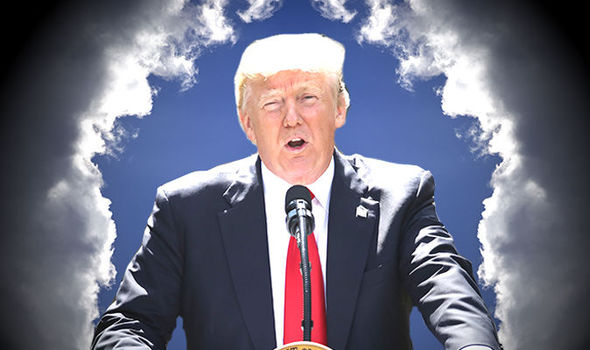