Congratulations, America. The pandemic now has states yelling at each other, and that always ends well. Let us take, for example, Idaho, a state that is like the nation’s attic in which we store all the crazy uncles and aunts. Idaho is one of the most hardcore Live-Free-and-Die states in the union. Back in March, a bunch of parents brought their kids to the steps of the state capitol so they could all burn their masks on local TV. (Used to be all you needed to do was build a decent soapbox derby car.) This owned the libs all the way into Oregon. Of course, now Idaho is foundering in the trough between the second and third waves of the pandemic, and it has decided to depend on the kindness of strangers. From CNN:

“It’s terrible. I don’t know if people understand the gravity of the situation,” Cassie Sauer, chief executive of the Washington State Hospital Association, told CNN Thursday evening. “This is not something that should be happening in America at this point.” Sauer says hospitals in Washington are getting more requests to take patients from overwhelmed facilities in Idaho. In some cases, sick Idahoans are simply driving themselves across the border seeking treatment. “The fact that it’s not causing severe alarm in Idaho is shocking to me,” Sauer said. “In a normal time, our hospitals would accept almost every transfer request. They’re accepting some, but they’re declining more now.”

You try at this point not to be cruel and unfeeling, but if I were a heart patient in, say, Spokane, and I couldn’t get a bed for my mitral valve surgery because all the ICU slots were taken up by COVID patients from a state run entirely by conservative Republican morons, I’d be pretty frosted, actually. Meanwhile, Idaho has decided to face the crisis by developing…wait for it…death panels!

Under the Crisis Standards of Care declaration announced Thursday, the Idaho Department of Health and Welfare said, “The massive surge of Covid-19 patients has exhausted the supply of staff, available beds and necessary resources to adequately address the increased demand for healthcare services. “The declaration is a decision of “last resort,” Idaho’s health department director, Dave Jeppesen, said earlier this month. It moved Idaho Gov. Brad Little to plead for eligible Idahoans to get vaccinated. “We have reached an unprecedented and unwanted point in the history of our state,” the governor, a Republican, said earlier this month.

For the love of god, do something. At least listen to the frustrated neighbors.

Back in Washington, Sauer is frustrated that the state’s neighbor to the east is not taking the kind of extensive steps Washington has to stem the tide. “Idaho’s not doing what it should. They don’t have a [statewide] mask mandate. They need to do their part,” said Sauer. “They cannot rely on Washington as their stopgap.”

The country’s patience is not inexhaustible.

One thought on “Remember When Sarah Palin Warned Us About “Death Panels”? Welp…” 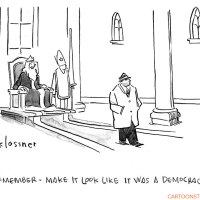