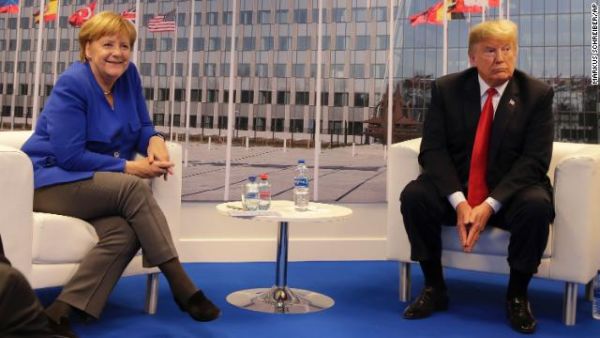 Trump and our Russian adversaries.

Trump and one of our main allies.

*Answer: The Russians have Trump by the balls and Angela Merkel HAS more balls than Trump ever will.

In an exchange caught on video, photographers gathered around Trump and Merkel in the Oval Office early Friday afternoon and suggested that the two leaders shake hands for the camera.

Merkel, a U.S. ally regarded highly by former President Barack Obama, turned toward Trump and asked, “Do you want to have a handshake?”

Trump, who seemed to be grimacing as he sat alongside Merkel, did not respond. He continued looking forward as the cameras rolled.

It is unclear whether or not Trump heard the chancellor, but clips of the exchange immediately made the rounds on Twitter. Reporters dubbed it “awkward.”

“[T]his is so awkward that i died while watching it,” The Atlantic’s Rosie Gray tweeted.