Sometimes my Mother can be a four-foot-eleven bundle of paradoxes.  Having come of age in the Depression Era, often she views things as either black or white, with very few shades of gray.

If I had a dollar for every time she told me that “a family should be able to live on just the husband’s salary,” I might have been able to do just that.  But then I would have missed out on the joys of cleaning other people’s teeth for a living.

Hmm….I’ll get back to you on that one.

Despite all of her firm traditional values, she (and my Dad) could be surprisingly open-minded at times.  For twenty-five years, until my Dad died, they lived in Laguna Beach, California.  (They weren’t wealthy, just lucky to have gotten a home there before it became the place to be for folks with tons of dough.)

Laguna had always been an artist colony and was increasingly becoming a mecca for the gay community—a San Francisco South, in other words.

So for people who believed in things being done the way they were supposed to be done, my folks were remarkably accepting of all that.

In fact, my Mother, a frustrated interior designer wannabe, embraced the male “ho-mo-sex-u-als,” as she called them–rarely using the appellation “gay”–with fervor because they were living her dream.  They had the best homes and gardens; when they bought a fixer-upper, you could be sure it would turn out spectacularly.

(Not so much the lesbian couple across the street—they were more into motorcycles.  As my Mother often says:  “Whatever.”)

With my Mother, you never know who’s going to turn up–will it be the Lifestyle Critic or the Libertarian?  Live as I say–or live and let live?

That’s what makes taking her to doctor appointments such an adventure.  I never know if she’s formulating some criticism in her mind which she’s suddenly going to articulate out loud–often in the middle of a crowded waiting room.

It’s like when my kids were toddlers and they would ask in a loud voice “Mommy, why is that woman so fat?” within earshot of what usually turned out to be a very pregnant lady and a store full of bemused shoppers.

Only with my Mother, you can’t stick a cookie in her mouth to shut her up.  Well…not very easily or inconspicuously, anyway.

So it was with some trepidation that I sat in the crowded (is there any other kind?) waiting room of the eye doctor with my Mother yesterday.

She, along with half the population of our town, was waiting for her pupils to dilate so the doctor could finish her exam.  Patients would disappear into the dark recesses of the office and come back out to the waiting room to quietly sit and dilate.  We were there for two hours before the process was completed.

She’d been doing pretty well, given the wait.  There was no repeat of the time she stuck her tongue out at me at her regular doctor’s office while the nurse was taking her blood pressure.

That was brought about by the argument we’d had earlier because she’d neglected to take her blood pressure medicine before the visit.

I knew the reading wouldn’t accurately reflect what her pressure normally is, and I was afraid the doctor would change her medication.  The last thing we needed was her passing out at home because her BP was too low.

So, of course, her BP reading was higher than normal.  But she made up for any scolding the nurse gave her by telling her we’d just had an argument, so it really wasn’t her fault.  Big smile aimed in my direction.

Which left me sitting there feeling like I had the words “Elder Abuser” written across my forehead in blinking neon.

But anyway, this visit was going quite well.

Then a large elderly man in a wheel chair was brought into the room by a young woman who must have been his granddaughter.  They stopped directly across from us and the woman sat down in a chair next to him.

Now, unlike my Mother, I try not to scrutinize people too closely in situations like this.  First of all, I don’t care that much.  Second, it’s none of my business.

But with this young woman, it was hard not to notice her.  She was kind of plump, with long brown hair.  She was wearing jeans and a stretchy sleeveless tank top, which exposed her arms and shoulders.  When she bent over, there was an abundance of cleavage on display.

But the most noticeable thing about her was her tattoos.

Tattoos on women have certainly become commonplace nowadays.  It’s not unusual to see them prominently displayed on just about any visible body part.

This gal was no exception.  I tried not to spend too much time observing her, but I couldn’t help but notice that, among the several tattoos I could see, there was a rather large head of a wolf on her upper left arm near her shoulder.

I remember thinking to myself “Why would a girl choose that?”

But then, again, as my Mother says:  “Whatever.”

The Tattooed Lady spent some time texting on her phone, but every once in awhile she would smile and talk to her grandfather and pat him on the arm in a reassuring way.  He seemed to appreciate her company and would smile warmly back at her.

Finally, we were released from our ophthalmological purgatory and I escorted my Mother out to the parking lot.  After we got into the car, she turned to me and asked “Did you see that girl with all the tattoos?”

Thinking to myself “Here we go—she’s going to blast away at how the younger generation is going to hell in a handbasket,” I replied that, yes, I did notice her but I try not to stare at people.

To my surprise she said “I thought it was wonderful the way she patted that man on his arm.  That was really sweet.  It just goes to show that you can’t judge a book by its cover.”

And sometimes the mother whom you feared would be wolf-like in her criticism, instead turns out to be–a little lamb.

More fun from the Eldercare Underground:

Another week, another trip to the grocery store with my 91 year-old mother.

For those of you who have been keeping up with this saga, you’ll remember we last left our heroine in a pitched battle with the Mother of All Mothers over why the grocery list was tossed out after the last trip to the store and the brouhaha (I’ve always wanted to use that word) that ensued.

You’ll also recall that there were no winners in that one.  There never is.

All my mother has to do is claim that I never told her what it is we’re “discussing” and that pretty much leaves me with no rhetorical ammunition with which to fire back.

You can’t argue with “You never told me that.”  I may as well be shadow boxing.

So today I went over to her house to pick her up to go grocery shopping and found that she wasn’t ready for me.  She insisted that I had told her we were going tomorrow.

I had last spoken with her just the day before to suggest we go today, but it was my duty (or will be from now on) to call her in the morning and confirm our appointment.  And you know if I’d done just that she would have been miffed that I doubted her memory.  Again, you can’t win.

While I waited for her to change her clothes, I washed her breakfast dishes and surreptitiously tossed out some really wizened up tomatoes she had left on the kitchen counter, along with some anemic looking cooked squash she had in the fridge.  I also checked the expiration dates on some of the stuff in there because I never know how long she’s been hanging on to things.

She has no concept about expiration dates and never has, so this is not something that’s surfaced in her old age.  I don’t know if it’s a Depression era thing or what.  Food doesn’t get thrown out no matter how awful it looks.

Last month I tossed a half of a head of cabbage that resembled a science project despite her objection of “that’s still good!”

My mother-in-law, who’s 92, is also notorious for saving little dribs and drabs of food in Tupperware containers in her freezer.

A tablespoon of some unrecognizable foodstuff here, a dollop of what we used to jokingly call “pre-digested” food there.

Finally my mother was ready to go.  As I walked out the door ahead of her she barked “Pull your shirt down in back!”

This, and the poke in the back to “stand up straight,” has been the bane of my existence with her.  I’m short-waisted.  Things ride up on me.

I replied that it would be nice if she didn’t start out the day by criticizing me right off the bat.

She said “Well, you were adjusting my clothes.”

To which I responded:

“That’s only because you asked me if you’d put your pants on backward!”

I guess I should count myself as fortunate.

At least at the grocery store she didn’t say “get your hand off the cart” this time. 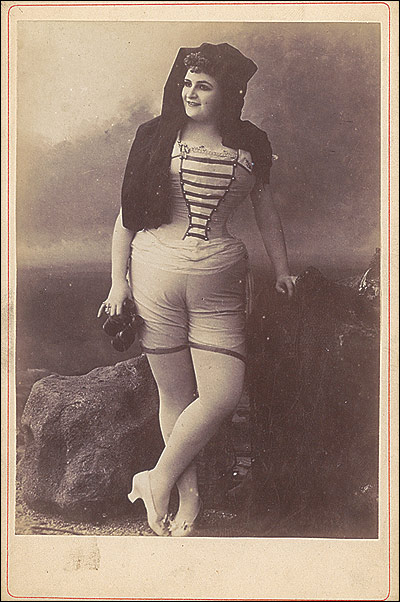