….Or, four and a half hours in the ER with my mother, who has a case of shingles.

Because the ER was so busy, we had to wait in this little waiting area until a space was available. Mostly golfing, Forbes and AARP magazines on the table. I now know more about Antonio Banderas and Melanie Griffith than I ever thought possible.  The oxygen tube on the wall might come in handy for either reviving or hanging yourself during the wait. 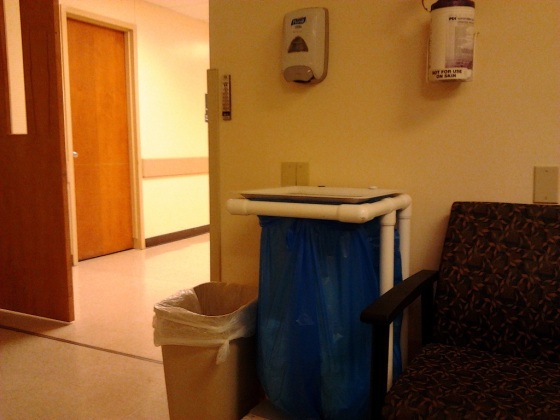 The view directly across from me in the waiting area. Creative use of PVC pipes gives them extra credit. (To be fair, our hospital was named one of the Top 100 hospitals in the country. We may be small, but we try harder.)

After a three hour wait, we were given a “bay” in the examining area. My mother thought those lamps were heat lamps. Either that or she might have thought we were there to get a tan. She did approve of the curtains, though.

The nurse told us they had to call another ER doctor to come in early since they were so backlogged with patients. When we did see him, he took one look at my mother and said “Yep, shingles.”  He said she had to take the first dose of medication there at the ER and then she could be discharged. Another hour and a half later, we were out the door.

Throughout the whole stay, my mother maintained a stoic composure.

The only time she showed any displeasure was when she signaled to me with her hand to come closer and said in a stage whisper, “Did you notice?”

She motioned to the nurses passing back and forth in the corridor and said,

Even with part of her torso covered in blisters, she still managed to wield her keen powers of observation.

The day wasn’t a complete washout, though.  I did get to enjoy a birthday cake with my daughter and her family.

But I made a mental note to get the shingles vaccine, pronto.