I picked up my mother’s cremated remains at the funeral home yesterday.  Technically, they’re called “cremains” by the funeral home folks.  An odd sounding word, at least to me.  A euphemistic way of stating the facts.

You’re not exactly saying “cremated,” but you’re not saying “remains” either.

It’s like, if we combine the two by saying them reallyfast, we can fool ourselves into thinking what we have in that little cardboard box is neither one.

The funeral home director brought the box out from another room and placed it on the table in front of me.  The gold ring my mother was wearing when she died was taped to the top of the box.  The director wanted me to be aware of that. When we spoke over the phone earlier, he’d made a point of telling me that they’d retrieved it from her when she arrived.

I guess they want to avoid any possible accusations by the family of their not returning valuables.  We do live in a litigious age, so you can’t fault them for that.

The director and his assistant, an older gentleman, were both very nice and accommodating.  Since my mother had pre-paid for her cremation with The Neptune Society, all I owed was $37 for the copies of her death certificate.

When you hear all the horrific tales about people spending huge sums of money on funeral arrangements, it feels a little weird writing a check for only $37.  No bronze casket with satin lining, gold handles or a waterproof concrete vault.

Just a cardboard box with her name on it and a gold ring taped to the top.

Since my mother wanted to be returned to California, we shipped her off to my son today.  He, along with his two cousins (all surfers or paddleboarders), will oversee the scattering of her ashes in the ocean off the beach at the end of the street where she lived with my Dad for 25 years.

Who needs bronze caskets, satin linings and all the rest of it when you’ve got the whole Pacific Ocean?

Have a good trip home, Mom. 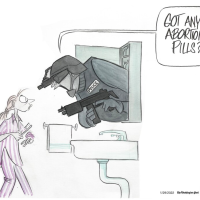