The President* of the United States said the following at Thursday’s episode of the Five O’Clock Follies:

“The disinfectant, where it knocks it out in a minute, and is there a way we can do something like that by injection inside, or almost a cleaning. It gets in the lungs.”

This spasm of thought-like activity was occasioned by a report delivered by Bill Bryan, the head of the science and technology division of the Department of Homeland Security. Bryan mentioned that, yes, disinfectants like Lysol are effective in killing the coronavirus on things like playground equipment, handrails, and doorknobs. Bryan also reported that the virus seems to die in bright sunlight and in warmer and more humid weather.

Then, with every spark gap in his mighty brain sizzling and cracking, the president* launched into the above improv while, over on the sidelines, Dr. Deborah Birx suddenly found herself in a thousand memes, looking as though she’d been hit on the head with a polo mallet. El Caudillo del Mar-a-Lago was really rolling, folks. He was one step away from advising Birx to go out and find a virgin to toss into a volcano.

God help us all. Governor Brian Kemp has given all Georgians permission to infect each other.

Everybody zip up those outer-space HazMat suits and go down and get yourself a haircut, provided the cord feeding you oxygen can stretch from your house in Decatur to Mutt’s Haircutting Place and Feed Store in Waycross. Now that Governor Brian Kemp has given all Georgians permission to infect each other, we’ve got to isolate that place so Georgians don’t infect the rest of us. Start building the big old bubble. Do it now.

(Kemp, you may recall, is the brainiac who was the last person on Earth to know that the coronavirus can be transmitted by asymptomatic carriers. What the hell, the guy probably shouldn’t be governor anyway.)

The list of non-essential businesses that Kemp is going to allow to reopen includes gyms, fitness centers, bowling alleys, body art studios, barbers, cosmetologists, hair designers, and nail-care artists. It sounds like Kemp is declaring that every strip mall in the state is now open for business, but it’s hard to imagine a list of businesses that would be more susceptible to the spread of epidemic disease. Can a hairstylist work from six feet away? Can a tattooist use a six-foot needle? And opening bowling alleys but keeping bars closed? Does Kemp understand how he is profaning the very spirit of bowling in that way? Washington state Gov. Inslee called on Trump to use the Defense Production Act to order private companies to produce items such as masks and ventilators, a step the president has resisted after announcing last week he would invoke the federal law. Inslee, citing the dire situation at Washington state’s nursing homes, called on the Pentagon to press defense companies to produce lifesaving materials.

Trump responded defensively, two of the people said, and told Inslee that he and the federal government have already done much for Washington and other states in recent days, ticking off several initiatives.

Though the president has faced mounting bipartisan calls to use his powers to compel private companies to help, he has said he is employing the law as leverage to win voluntary cooperation. His campaign on Thursday tweeted a list of major corporations, including 3M, that have said they will increase production of such supplies.

Behind the scenes, business leaders have lobbied Trump not to invoke the law and conservative advisers have warned the president that doing so would draw a backlash and could cut into his argument of running against socialism in the fall, said two administration officials.

On Thursday, a union leader representing health-care workers, Lee Saunders, said the impossible situation has already occurred, noting that some health workers in New York have donned garbage bags because hospitals are short of protective gowns.

It is time for networks to stop televising the daily briefings from the Coronavirus SuperFriends live. They are vehicles for dangerous disinformation and for the president*’s re-election campaign. You get the sense that he’s getting juiced for them now that he can’t hold his mass rallies any more. But, mainly, people are told things at these briefings that at worst are perilously untrue. (Has he actually activated the Defense Production Act? Nobody seems sure.) And at best they provide false comfort for a nervous nation, which is what Alexander rightly was trying to get at when he served up that softball about frightened Americans. The president* responded by hitting himself repeatedly over the head with his bat. Somebody get the hook.

As Trump took the podium at Thursday’s briefing, his effort to blame China for the spread of the coronavirus was evident in his briefing notes.

A Washington Post photographer captured a photo of Trump’s notes showing that the word “Corona” had been crossed out in his typed notes and replaced with “Chinese,” written by hand. Trump on Thursday repeatedly referred to the coronavirus as “the Chinese virus,” a phrase that critics have argued is racist and puts Asian Americans at risk.

When Trump delivered that part of his remarks, however, he skipped over the word “Chinese,” simply describing the coronavirus as “the virus.”

Social distancing hit the set of President Donald Trump’s favorite morning cable news show Tuesday, with the three hosts of “Fox & Friends” scattered across their New York studio in an effort to demonstrate best practices amid the coronavirus pandemic.

Although the Centers for Disease Control and Prevention recommend Americans maintain a distance of 6 feet to help thwart the coronavirus’ rapid spread, co-host Steve Doocy said he and his colleagues usually sit only about 18 inches apart on the show’s signature “curvy couch.”

Tuesday morning, however, Doocy was alone on the mezzanine-level sofa, while Kimeade anchored “the big plastic desk” one floor below and co-host Ainsley Earhardt was stationed behind a lectern in the studio’s “fish bowl area.”

The new seating configuration reflects the seriousness with which President Donald Trump and his staunchest allies, both in media and politics, are now taking the coronavirus threat after being dismissive of its risk to Americans.

On-air talent and guests at Fox News have drawn special scrutiny for downplaying the disease in recent weeks. On Friday, Earhardt remarked that it was “actually the safest time to fly” despite advisories against nonessential travel, and conservative religious leader Jerry Falwell Jr. appeared on the program to accuse people of “overreacting” to the novel coronavirus. 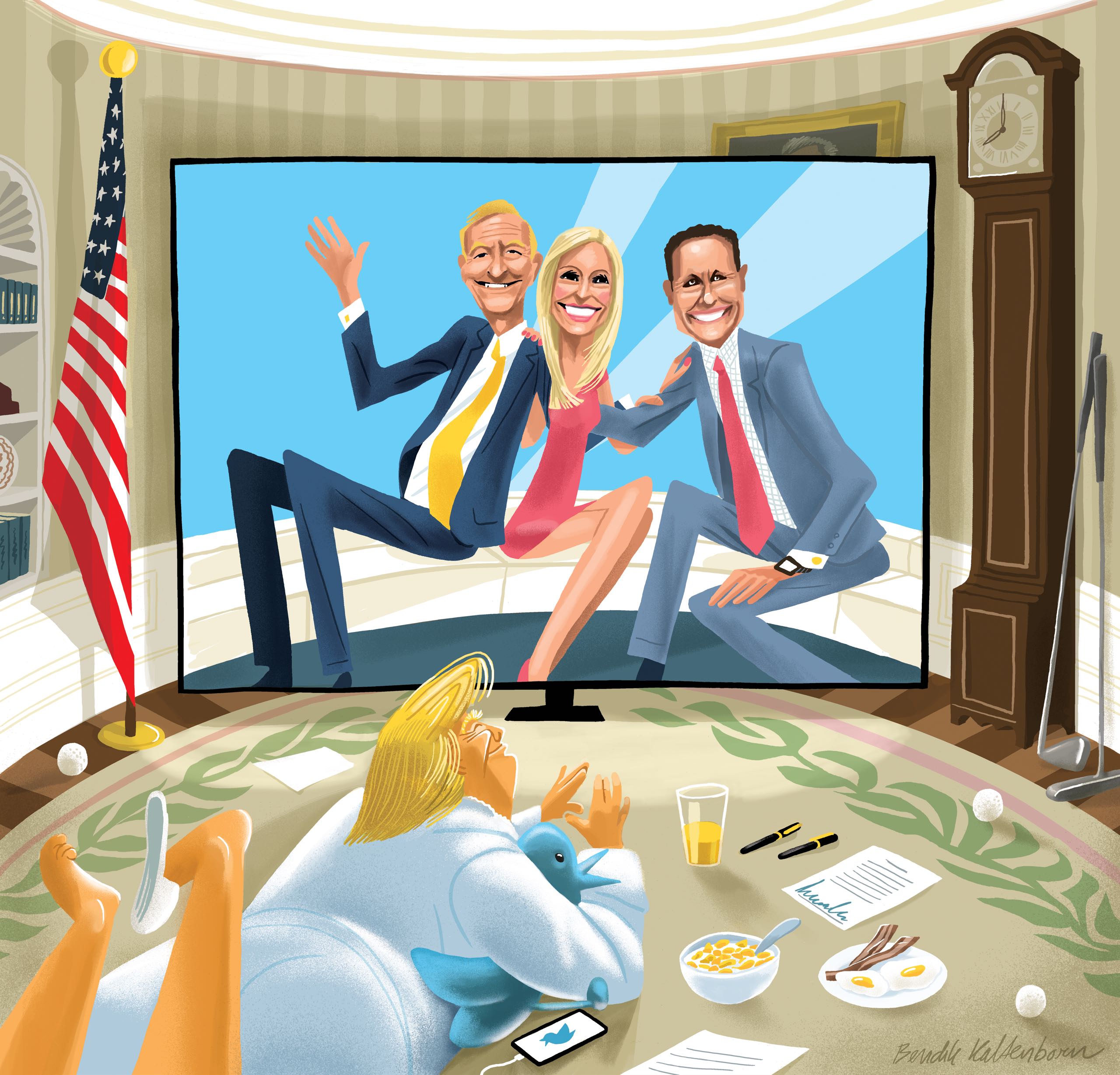