In my last post I opened my big mouth and said I would show what my cutting process entailed.  Up front, I want to say that very often the scissor artist (well, me for sure) has to deal with mistakes.  Things get lopped off or over-cut and that’s just part of the challenge.  So when I chose this silhouette of a boy and girl riding a kiddie jalopy, I’d hoped this one would come out in what passes as “perfect” for me.

It didn’t, but I’m using it anyway.

By way of disclaimer, this silhouette is one of the group of 1920’s kids that I used to do exclusively in pastels.  Cutting this one in black belatedly showed an error in its design, which I “fixed” after it was finished by gluing a very thin piece of black paper to cover the back of the offending area.  It just didn’t “read” right for me, but now it does.

Anyway—to begin—this first photo shows the design printed on the back of the silhouette paper.  (This paper happens to be 8″x8″ square, which isn’t a real convenient size because trying to get it to go through my printer correctly is a challenge in itself.)  But we move on. 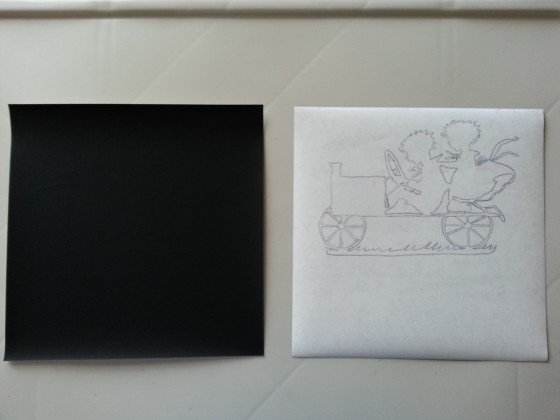 The next photo is the paper after being trimmed with just regular kitchen shears.  The idea is to remove enough excess paper so you can get as close to the design as possible.  At the top are my Gingher scissors next to a ruler for size context.  You can see that they are very pointy.  As Martha Stewart says, it’s a good thing.

I think the most important tip for cutting is to be sure to start with the smallest inside cuts first.  The reason for that is the more paper you cut away, the floppier the silhouette gets, so you wouldn’t start with cutting the border outline first.  Having enough uncut paper around the small inside negative spaces (the spaces created by the solid positive spaces) is really necessary.  If you had to go back and cut those areas after most of the other ones were removed it would be difficult.  The paper would bend or tear and….just trust me.  Cut the small spaces first.  I pierce the middle of the space with the tip of one of the blades and then start making tiny cuts toward the outline, following it until the entire space is cut. 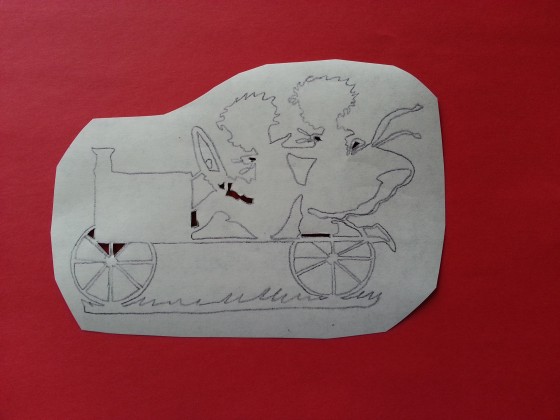 After cutting the smallest inside areas, I usually work outwards by cutting the ones that are a little larger.  Here I’ve done all of them except for the wheels. 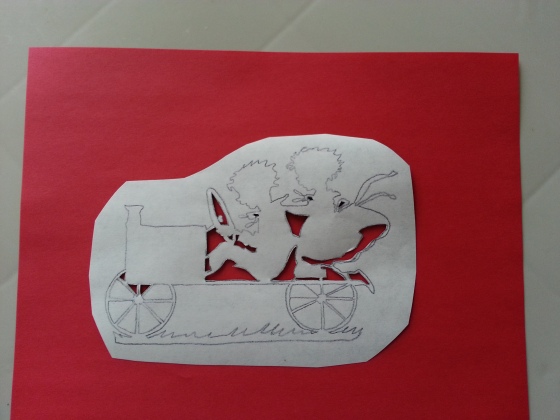 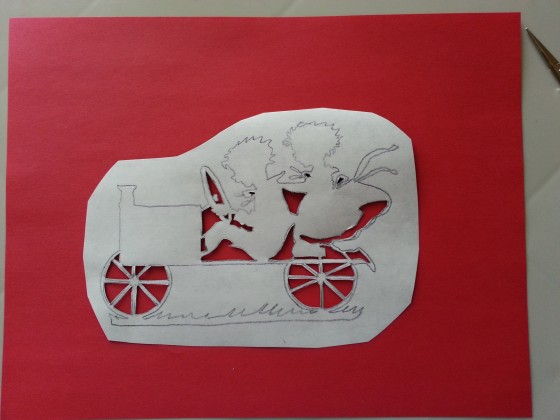 Then I cut the large inside space between the wheels.  You can see that I did this in pretty much one piece.  The grass was cut using a kind of slashing cut, not in one continuous cut.  Whatever works, I say!  Also, if I’d cut this area first before the insides of the wheels, imagine how hard that would be.  Oy. 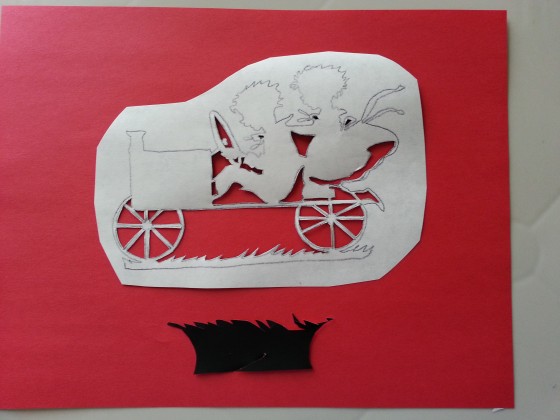 So then, I like to start cutting the border outline with the heads.  That’s usually the most difficult part and I like to get it out of the way first.  Also, remember, I still have a little more paper left and that helps keep things from getting too floppy and unmanageable. 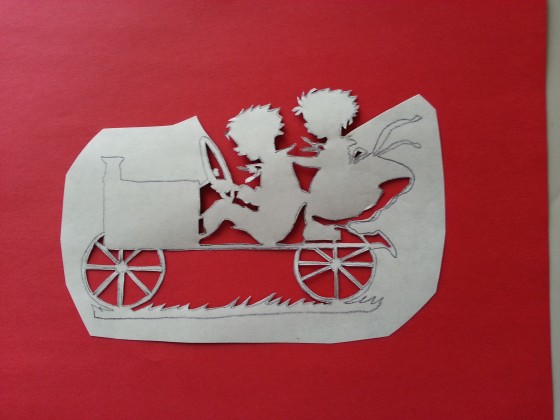 I finish up by cutting the remainder of the outline, removing the bit underneath that’s still shown here.

I always go back and tweak things here and there.  That’s where I decided to add the piece under the girl’s leg to make it “read” better.  As I said, this hadn’t occurred to me before with the pastel silhouettes, but it was more obvious with the black one.  My own worst critic.  But, you know, it’s okay.  It’s the overall impression that counts.  Hand-made art has imperfections.  As RuPaul says, can I get an amen up in here?