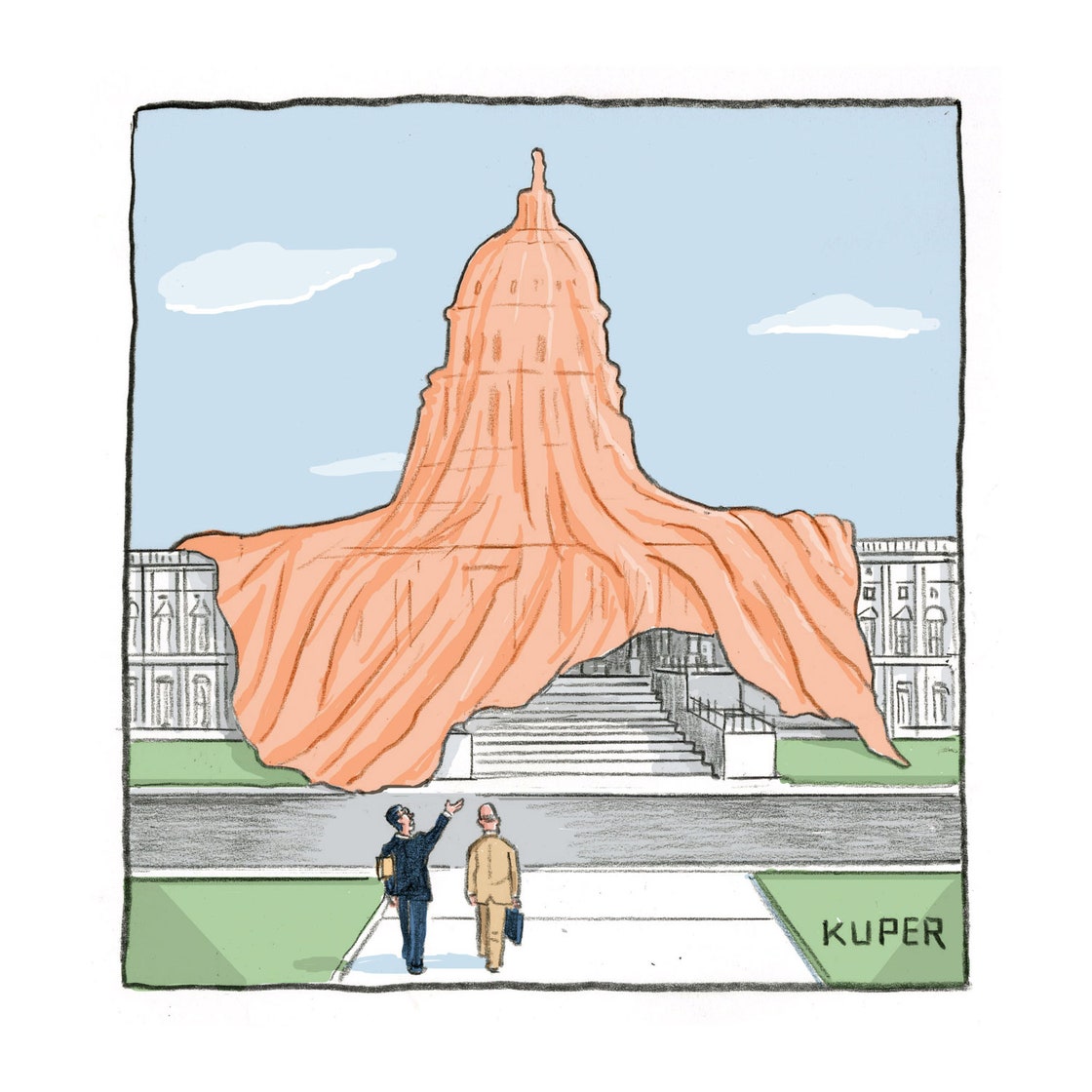 “There was a concern that it was reminding the President of John McCain.”

“What an absolute disgrace. John McCain’s legacy was inflated by historic proportions on his death, but it increasingly seems he was the only thing tethering Graham to any kind of honor, or ethics, or principle in public service. It now seems that while Graham might have seen McCain as a friend, he was more interested in him as a political benefactor, gobbling up the gravitas and the power like a Hungry Hungry Hippo. Now that McCain has died, Graham has simply chosen a new benefactor. Never mind that Trump dragged his old friend’s name through the mud, ridiculing his service in Vietnam at the time where Trump was dodging the draft by claiming he had “bone spurs.” Later, Trump would tell Howard Stern that avoiding sexually transmitted diseases in 1970s New York was his “personal Vietnam.”

There are many lessons from The Trump Era, particularly when it comes to the conservative movement. The cruelty is the point. The most important part of “White Evangelical Christian” is white. The very concept of public service has begun to collapse, as the Trump administration has completely corrupted the Executive Branch and defenestrated the concepts of ethics or conflicts of interest. And members of the Republican Party are now split into two groups: the True Believers and the cynical opportunists who will do anything to stay in Washington.

Do you really think Graham has watched Trump’s behavior in office and come to the conclusion that he is the right man for the job? No, he’s just the political parasite he’s always been. But nobody who attaches themselves to Trump makes it out. Nobody.”

At a White House event at a tank manufacturing facility in Lima, Ohio, on Wednesday, Trump lashed out at McCain, saying, “I endorsed him at his request and I gave him the kind of funeral he wanted, which as president I had to approve.”

“I don’t care about this,” Trump continued. “I didn’t get a thank you. That’s okay. We sent him on the way. But I wasn’t a fan of John McCain.” Republican Sen. James Inhofe told reporters Monday that Sen. John McCain was “partially to blame” for the controversy over the lowering of the White House flag.

Inhofe, a senior member of Senate Armed Services Committee, was highly complimentary of McCain but when asked about the flag flap he attributed it to the late senator’s public spat with President Donald Trump in recent years. He described both men as “strong willed people.”
“Well, you know, frankly, I think that John McCain is partially to blame for that because he is very outspoken. He disagreed with the President in certain areas and wasn’t too courteous about it,” Inhofe said.

“And this snowball is warmer than Trump’s heart.”

U.S. flags at the White House returned to full-staff on Monday morning as the nation continued to mourn the death of Sen. John McCain (R-Ariz.).

The flags were lowered Saturday night following McCain’s death from brain cancer, but Trump did not issue a proclamation calling for flags to remain at half-staff for an extended period, such as through the day of the senator’s interment.

The U.S. code calls for flags to be lowered in the event of the death of a member of Congress “on the day of death and the following day.” But presidents have the power to issue proclamations extending that period.

Presidential historian Michael Beschloss called the move “sickening” during an appearance on MSNBC. Conservative commentator Bill Kristol, meanwhile, wrote on Twitter: “The White House is now an island of bitterness and resentment in a nation united in respect and appreciation.” Others on Twitter responded using the hashtag #NoRespect. 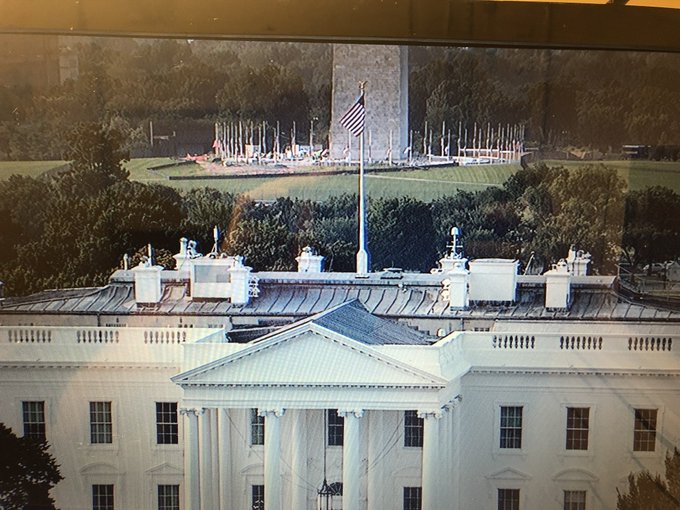 Republican Sen. Ron Johnson of Wisconsin said Tuesday that he thinks that Sen. John McCain’s brain tumor and the early morning hours may have affected the Arizona Republican’s no vote on the Senate bill to repeal Obamacare.

McCain voted no on the so-called skinny repeal, explaining in a radio interview last week that he disagreed with the process leading up to the vote and saying he supported repealing Obamacare but with an immediate replacement. McCain returned to the Senate to vote on health care-related legislation after a surgery to remove a blood clot revealed he had brain cancer.

Johnson argued that the brain tumor may have affected McCain’s vote.

“We did get a call from Paul (Ryan) and he assured us that skinny repeal was not going to pass the House it would have to go to conference,” said the Wisconsin senator on AM560 “Chicago’s Morning Answer.”

“Again, I’m not gonna speak for John McCain — he has a brain tumor right now — that vote occurred at 1:30 in the morning, some of that might have factored in,” he continued.

Seemingly shocked, a radio host responded “really?” to Johnson’s comments and asked if he really believed McCain’s brain tumor might have factored into his judgment.

“Again, I-I-I don’t know exactly what — we really thought — and again I don’t want speak for any senator,” Johnson responded. “I really thought he was going to vote yes to send that to conference at 10:30 at night. By about 1, 1:30, he voted no. So you have talk to John in terms what was on his mind.”

So, y’all remember that time during the presidential campaign when Donald Trump said he didn’t consider John McCain a hero because he “likes people who weren’t captured?”

Yeah. I remember it too. And I’m sure John McCain remembered it last night when he cast the deciding vote to put a stake through the heart of the “skinny-ass repeal” bill no Republican senator actually wanted to become law.

Granted, McCain is no fan of Obamacare. He was practically dragged out of his deathbed by fellow Republicans to come to the Senate to save their sorry-ass bill so it could pass further along (as Andrew Sullivan wrote in New York Magazine today, “…like a kidney stone through the constitutional system.”)

But McCain hated this monstrosity too because it was the antithesis of how a bill should be passed.  Plus, he didn’t trust that Ayn Randian accolyte, Paul Ryan, when he said he could control his House members enough to keep them from passing this turd.

And then there’s the lovely Lisa Murkowski. I’m beginning to be a fan of hers. Ryan Zinke, the Secretary of the Interior, tried to put the ham-handed squeeze on her because she’d previously voted “no” for advancing the bill to the Senate floor for debate.

The Alaska Dispatch News on Thursday reported that Zinke had called Senators Lisa Murkowski and Dan Sullivan, both Republicans, on Wednesday. He warned them that Murkowski’s vote on Tuesday against a motion to begin debate on the healthcare overhaul could have negative consequences for energy and land use in Alaska, the newspaper said. Murkowski’s no vote forced Vice President Mike Pence to cast a tie-breaking vote to pass the motion by a 51-50 ballot.

But Zinke failed to note that Murkowski is basically his boss. So Zinke didn’t reckon with this happening, as per CNN:

Murkowski chairs the Senate energy and natural resources committee and frequently references Alaska priorities in her position. She also oversees the confirmation process for the Interior Department.
A committee hearing on nominations to the Department of Interior and Department of Energy that was scheduled for Thursday was postponed Wednesday afternoon without a determined reschedule date.
Murkowski told CNN Thursday that the nominations vote was delayed just to work out a “little bump.”

The absence of the Arizona senator, who was diagnosed with brain cancer last week, has made getting 50 votes to start debate on the bill exceedingly difficult. GOP leaders are hoping he can surprise everyone and return Tuesday.

“They were trying to get approval [from his doctors] for his travel arrangements. I’ve personally volunteered to rent an RV,” said Senate Majority Whip John Cornyn of Texas. “But we haven’t heard anything.” “John McCain must really be worried about his re-election race back home in Arizona, because he’s saying stuff that sounds calculated to rile up The Base instead of making sense. Thursday, McCain said — twice — that President Barack Obama was “directly responsible” for last week’s massacre in Orlando, before later backing off and claiming he’d “misspoken.” We’re still waiting on McCain to issue a further clarification explaining he has no idea what “misspoken” actually means.

While the president was in Orlando meeting with survivors and family members of those killed in the worst mass shooting in American history, McCain told reporters in the Capitol that Obama had pretty much pulled the trigger himself:

“So the responsibility for it lies with President Barack Obama and his failed policies,” McCain said.

That’s some pretty impressive logicking! So what McCain is really saying is that George W. Bush also shot 49 people, because without his war of choice in Iraq, which destabilized the entire Middle East, there never would have been an ISIS to replace al Qaeda, which didn’t exist in Iraq at all until after the 2003 invasion. (Haha, we are kidding. It’s all Ike’s fault for sending the CIA to overthrow Mossadegh in Iran in 1953).

Ever the troublesome naysayers, the Associated Press points out that the shooter, Omar Mateen, did indeed claim to be working on behalf of ISIS. But he also claimed to be affiliated with al Qaeda and Hezbollah, which are both at war with ISIS in Syria. It’s almost as if the guy just rattled off the names of any radical terrorist groups that came to mind regardless of ideological consistency. (We mean Mateen, but it works for McCain, too.)

About 90 minutes after blaming the president for killing all those people in the Pulse nightclub, McCain issued a statement saying he’d misspoken, even though his words had been pretty precise, if stupid. This time around, Obama was still a terrible guy, but OK, maybe the actual shooter had something to do with the shootings:

“As I have said, President Obama’s decision to completely withdraw U.S. troops from Iraq in 2011 led to the rise of ISIL. I and others have long warned that the failure of the president’s policy to deny ISIL safe haven would allow the terrorist organization to inspire, plan, direct or conduct attacks on the United States and Europe as they have done in Paris, Brussels, San Bernardino and now Orlando.”

So that was nice of Sen. Snarly McGrumpyface: It’s still Obama’s fault, though not his direct fault. And maybe Obama’s evolving position on marriage equality made the shooter a self-hating gay man following a homophobic faith, too.”