“And Senate Republican Leader Mitch McConnell (Ky.) was resolutely silent until late Monday, when the architect of the plan to deny President Barack Obama’s Supreme Court nominee, Merrick Garland, a hearing for 293 days went to the Senate floor and complained that Democrats didn’t follow “standard bipartisan process” by raising the allegations earlier.” 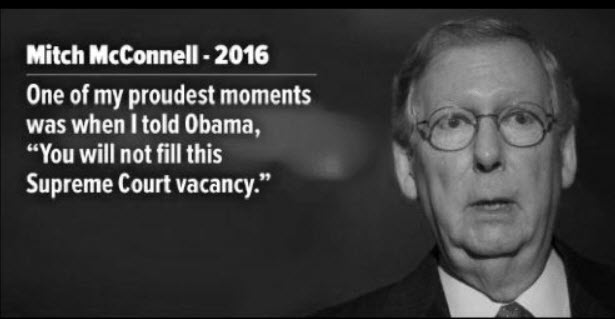 Courtesy of The Daily Kos and Bill in Maine:

Twas the night before Christmas and in his penthouse

Martin Shkreli was relishing his life as a louse

His millions were stacked to the ceiling with care

In bundles of Franklins thirty feet in the air

The pharma CEO slept smug in his bed;

While visions of price-gouging danced in his head;

Like the price of an AIDS drug he’d recently sent

Soaring to the heavens by five thousand percent

When over on Twitter there arose such a clatter,

Away to the home page I flew like a flash,

“BREAKING: Turing CEO’s career is headed for a crash!”

The moon over midtown made the Big Apple glow,

As if in a spotlight for a really big show,

When what to our wondering eyes did appear,

But a team of G-Men in full G-men gear

With a warrant for arrest and list of charges so thick,

I knew in a moment they’d be cuffing this prick

More rapid than eagles through his foyer they came,

And they read him Miranda, then his transgressions by name:

“You fraudster! You stealer! You vulture! You cheat!

You swindler, you schemer, you freaking deadbeat!

To the back of the car! To your waiting jail walls!

And then, in a twinkling, I heard on Late Edition

That Shkreli had been fired from his corporate position

As I turned my head and was scratching my duff,

I saw perp-walking Martin, all bound up in cuffs.

He was smarmy and pale, a narcissistic little shit,

And America convulsed in a schadenfreudic fit;

The fear in his eye—oh, yes, it was there,

Soon gave me to know this guy had no prayer

He spoke not a word, but soon lost his smirk,

As prosecutors drooled over nailing this jerk,

And the whole world exclaimed as he disappeared with a snort

“Karma’s a bitch, pharma bro, and we’ll see you in court.”