Sen. Mike Lee (R-Utah) announced that he, too, has tested positive for the coronavirus.

The senator was at the White House on Saturday for Trump’s Rose Garden event announcing Judge Amy Coney Barrett as his Supreme Court nominee where there was virtually no one wearing masks and no social distancing.

In a statement, Lee said he tested negative at the White House ahead of that event but began experiencing allergy-like symptoms Thursday. He got tested again, and it came back positive.

Lee, a member of the Senate Judiciary Committee, met with Barrett on Tuesday on Capitol Hill, and the two were photographed together not wearing masks. Lee has also had close contact with the committee’s chairman, Sen. Lindsey O. Graham (R-S.C.).

“No, I don’t think he’s racist,” Graham said on the Snapchat show “Good Luck America.” “Here’s what I think: You can be black as coal, and if you like him, he likes you. You can be albino, and if he doesn’t like you, he doesn’t like you. He’s about him. If you like him, he probably likes you. There’s a flaw there, but no, I don’t think he hates people because of the color of their skin. I think he reacts to people as how they react to him. I really believe that.” 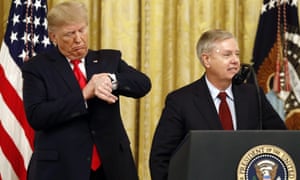 “What an absolute disgrace. John McCain’s legacy was inflated by historic proportions on his death, but it increasingly seems he was the only thing tethering Graham to any kind of honor, or ethics, or principle in public service. It now seems that while Graham might have seen McCain as a friend, he was more interested in him as a political benefactor, gobbling up the gravitas and the power like a Hungry Hungry Hippo. Now that McCain has died, Graham has simply chosen a new benefactor. Never mind that Trump dragged his old friend’s name through the mud, ridiculing his service in Vietnam at the time where Trump was dodging the draft by claiming he had “bone spurs.” Later, Trump would tell Howard Stern that avoiding sexually transmitted diseases in 1970s New York was his “personal Vietnam.”

There are many lessons from The Trump Era, particularly when it comes to the conservative movement. The cruelty is the point. The most important part of “White Evangelical Christian” is white. The very concept of public service has begun to collapse, as the Trump administration has completely corrupted the Executive Branch and defenestrated the concepts of ethics or conflicts of interest. And members of the Republican Party are now split into two groups: the True Believers and the cynical opportunists who will do anything to stay in Washington.

Do you really think Graham has watched Trump’s behavior in office and come to the conclusion that he is the right man for the job? No, he’s just the political parasite he’s always been. But nobody who attaches themselves to Trump makes it out. Nobody.”

From the Washington Post, by (gasp!) George F. Will:

“Back in the day, small rural airports had textile windsocks, simple and empty things that indicated which way the wind was blowing. The ubiquitous Sen. Lindsey O. Graham has become a political windsock, and as such, he — more than the sturdy, substantial elephant — is emblematic of his party today.

When in 1994, Graham, a South Carolina Republican, first ran for Congress, he promised to be “one less vote for an agenda that makes you want to throw up.” A quarter-century later, Graham himself is a gastrointestinal challenge. In the past three years, he had a road-to-Damascus conversion.

In 2015, he said Donald Trump was a “jackass.” In February 2016, he said: “I’m not going to try to get into the mind of Donald Trump, because I don’t think there’s a whole lot of space there. I think he’s a kook, I think he’s crazy, I think he’s unfit for office.” And: “I’m a Republican and he’s not. He’s not a conservative Republican. He’s an opportunist.” Today, Graham, paladin of conservatism and scourge of opportunism, says building the border wall is an existential matter for the GOP: “If we undercut the president, that’s the end of his presidency and the end of our party.” Well.

Six years after its founding, the Republican Party produced the president who saved the nation. The party presided over the flow of population west of the Mississippi, into space hitherto designated on maps as the Great American Desert. (The Homestead Act of 1862 was enacted by a Republican-controlled Congress.) The Morrill Act of 1862 (Vermont Rep. Justin Morrill was a Republican) launched the land-grant college system that began the democratization of higher education and advanced the science-intensive agriculture that facilitated the urbanization that accelerated the nation’s rise to global preeminence. The party abetted and channeled the animal spirits that developed the industrial sinews with which 20th-century America defeated fascism and then communism. Now, however, Graham, whose mind might not have a whole lot of space for pertinent history, thinks this party’s identity and survival depend on servile obedience to this president’s myopia.

During the government shutdown, Graham’s tergiversations — sorry, this is the precise word — have amazed. On a recent day, in 90 minutes he went from “I don’t know” whether the president has the power to declare an emergency and divert into wall-building funds appropriated by Congress for other purposes, to “Time for President . . . to use emergency powers to build Wall.” The next day, he scrambled up the escalation ladder by using capitalization: “Declare a national emergency NOW. Build a wall NOW.” Two days later, he scampered down a few rungs, calling for his hero to accept a short-term funding measure to open the government while wall negotiations continue. Stay tuned for more acrobatics.

But stay focused on this: Anyone — in Graham-speak, ANYONE — who at any time favors declaring an emergency, or who does not denounce the mere suggestion thereof, thereby abandons constitutional government. Yes, such a declaration would be technically legal. Congress has put on every president’s desk this (to adopt Justice Robert Jackson’s language in his dissent from the Supreme Court’s 1944 Korematsu decision affirming the constitutionality of interning of U.S. citizens and non-citizens of Japanese descent) “loaded weapon, ready for the hand of any authority that can bring forward a plausible claim of an urgent need.” Or an implausible one. However, an anti-constitutional principle would be affirmed. The principle: Any president can declare an emergency and “re-purpose” funds whenever any of his policy preferences that he deems unusually important are actively denied or just ignored by the legislative branch.

Why do they come to Congress, these people such as Graham? These people who, affirmatively or by their complicity of silence, trifle with our constitutional architecture, and exhort the president to eclipse the legislative branch, to which they have no loyalty comparable to their party allegiance?

Seven times, Graham has taken the oath of congressional office, “solemnly” swearing to “support and defend the Constitution” and to “bear true faith and allegiance” to it, “without any mental reservation.” Graham, who is just 1 percent of one-half of one of the three branches of one of the nation’s many governments, is, however, significant as a symptom. When the Trump presidency is just a fragrant memory, the political landscape will still be cluttered with some of this president’s simple and empty epigones, the make-believe legislators who did not loudly and articulately recoil from the mere suggestion of using a declared emergency to set aside the separation of powers.”

“What concerns me about the American press is this endless, endless attempt to label the guy some kind of kook not fit to be president.”
— Sen. Lindsey Graham, this week 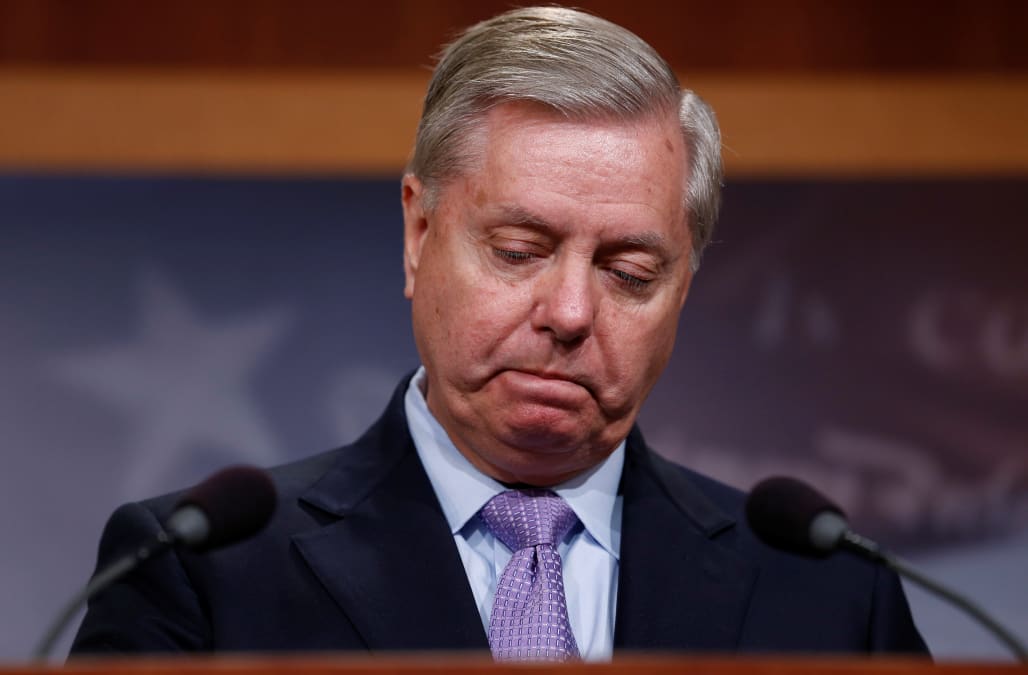 And Graham said he expects the Senate to pass a sanctions package that could slap Russia with penalties for its interference in the 2016 election. If Trump doesn’t sign it, he said, “He would be betraying democracy.”

“I’m going to bury democracy nice and deep where no one can find it.”

A bill — finalized yesterday, has not been scored, amendments not allowed, and 3 hours final debate — should be viewed with caution.