President Trump lashed out Sunday night at the news media for reporting that he would meet with Iranian leaders with “no conditions” — something Trump has said on camera at least twice and that senior administration officials repeated to reporters just last week.

“The Fake News is saying that I am willing to meet with Iran, ‘No Conditions.’ That is an incorrect statement (as usual!),” Trump wrote to his more than 64 million Twitter followers.

In fact, Trump said as much during a June 23 appearance on NBC’s “Meet the Press” after host Chuck Todd asked if he had a message to deliver to Ayatollah Ali Khamenei, Iran’s supreme leader, about his country’s potential development of a nuclear weapon.

“You can’t have a nuclear weapon. You want to talk? Good. Otherwise you can have a bad economy for the next three years,” Trump said.

“Not as far as I’m concerned. No preconditions,” Trump replied.

That echoed Trump’s comments at a July 30, 2018, joint news conference at the White House during a visit by Italian Prime Minister Giuseppe Conte.

Asked about a potential meeting with Iranian President Hassan Rouhani, Trump said: “I believe in meeting. I would certainly meet with Iran if they wanted to meet. I don’t know if they’re ready yet.”

“I’m ready to meet anytime they want to,” Trump added. “No preconditions. If they want to meet, we’ll meet.”

During a briefing at the White House on Tuesday, both Treasury Secretary Steven Mnuchin and Secretary of State Mike Pompeo confirmed that Trump remained open to such talks.

“The president has made clear, he’s happy to take a meeting with no preconditions,” Mnuchin told reporters.

“The president’s made it very clear: He is prepared to meet with no preconditions,” Pompeo said shortly afterward. 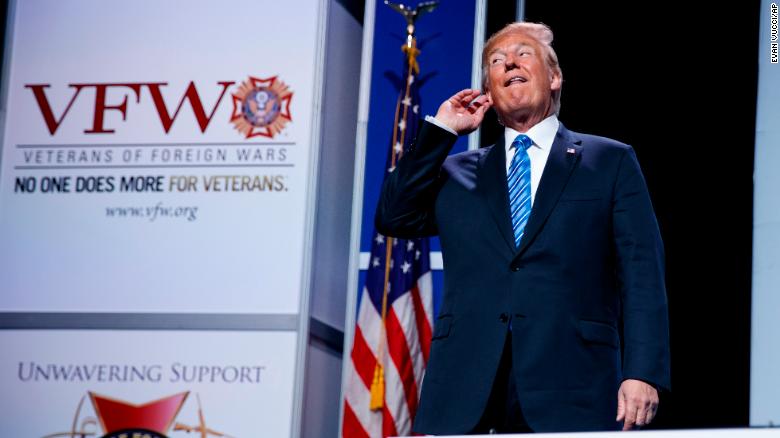