This, specifically, is exactly what I thought of when I wanted to Make America Great Again. To the letter. Donald Trump has delivered on his promise, to me and to other voters.

I was sick of President Barack Obama apologizing for America. I want a president who apologizes for Saudi Arabia. That is what greatness is. I’m not alarmed by this. It is always what I had in mind, from that first day when I saw him ride down the escalator. I have exactly as much love and support for the Saudi regime as I don’t have for refugees seeking to immigrate to this country, or the independent judiciary, as a concept. I’m honored that Donald Trump is representing this deeply held ideal of mine: that democracy is kind of meh and America’s greatness has always lain in its deference to autocrats. “Whatever is happening in the rest of the world is fine, and we should just leave it,” as whoever FDR beat in the election used to say. “America First!”

I’ve always felt a deep love for the Saudi royal family, and everyone in my place of worship agrees. I was always writing in to Fox News saying, “Why aren’t you praising Saudi Arabia more strongly? Where is your loyalty to MBS? I see the op-ed writers, but not you!” Now I feel complete. I loved that sword dance, and the thing with the orb. This, specifically, was always my dream.

I have always ranked unforgivable crimes as follows:

Then way, way down deep at the bottom of the list, scarcely even visible: Order the murder of a journalist.

Finally we have a president who can stand up to people who have too long gone unchallenged: Gold Star Mothers, Gold Star Fathers, POW senators, our intelligence agencies and the admiral responsible for the raid on Osama bin Laden. One thing that motivated me when I went to the polls was the thought of seeing someone really lay into the guy who got bin Laden. My eagle soars a little higher just at the thought of it. America First!

Reading the presidential statement on the slaying of Post journalist and Virginia resident Jamal Khashoggi, I felt my heart swell with patriotic pride. This is what America has always been about: not even trying to reach for higher moral ground. The world is a creepy place. Bad things happen. America First! I have always thought of America as less of a city on a hill and more of a city under a hill.

When I see Lady Liberty, I see a lady who is burning a lamp. Lamps need oil! We must keep oil cheap. That’s the lesson I take from her. Never disrupt your ties to Saudi Arabia for any reason.

I am reminded of the immortal words of the Declaration. “We hold these truths to be self-evident, that a close relationship with Saudi Arabia is worth sacrificing almost any principle, that we only paid lip service to principles, that the world is an ugly place.”

Whom can we trust? The CIA, or a foreign regime noted for its human rights abuses? Who can say? We can never know. We cannot know. We must embrace the uncertainty. The mark of greatness is having enough power to do whatever you what, countenance whatever you want. When you’re a star, they let you.

America’s Greatness has always lain in its subservience to the exigencies of personal greed. That was the thing I wanted us to bring back. I wanted us to countenance more murders and stand for less. Hatred, fear and accepting the ugliest aspects of the status quo: That’s what I believe in! That’s what I voted for.

The only thing I love as much as standing for the national anthem is standing for nothing. This is what greatness is. I feel great already. 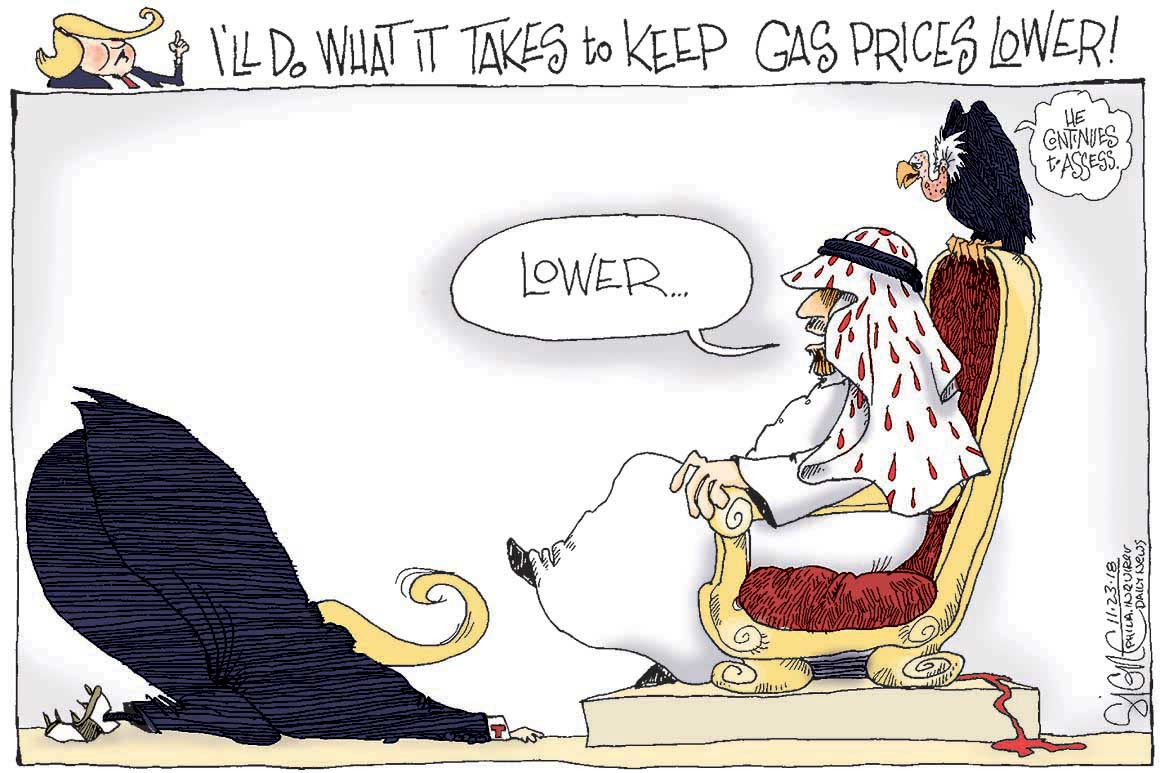