Costume department of the Dutch Opera and Ballet 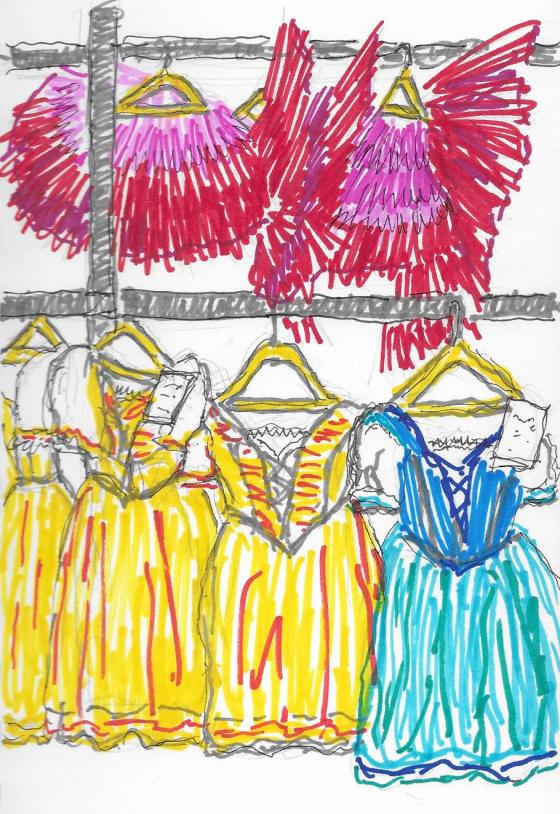 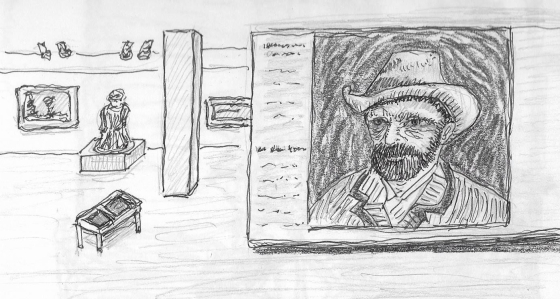 The Virtual Paintout is back after a long hiatus this year.

(Check out the link in my blog roll on the right of the page.)

Each month Bill Guffey, the wonderful artist who runs the whole shebang, picks a spot somewhere on the planet for artists of all stripes to convene and travel the streets via Google Street View and then submit their artwork of the spots they find interesting.

The choice this last month was the U.S. Virgin Islands.

My husband of 42 years passed away in June. He always encouraged me in my artwork and had been after me to get back into it, but his months long illness and radiation treatments took their toll on both of us and I just didn’t have the will to do that.

So when Bill started up his website again in August, I thought I’d give it a go. I didn’t have quite yet what it takes to do a full blown painting, so I found this rooster strutting his stuff in front of a house and did a quick sketch using color markers. And here it is.

I call this one “Funky chicken.”

This month’s Virtual Paintout in Manhattan is going to be ending soon, so I did one final entry before saying goodbye to all the fascinating people I saw there.

Since New York City is so alive with interesting people–all of them walking, walking everywhere in a big hurry–I was compelled to do a second entry for this month’s Virtual Paintout in Manhattan.

Well, I’m back in the saddle, so to speak, with the Virtual Paintout!

This month’s location is Manhattan in New York City.

Since my son-in-law is a police officer, I was thrilled to discover this gentleman standing proud at 130 E. 49th St.

I’ve titled the drawing “To protect and serve.”  Enjoy!

I felt I had to squeeze one last painting in to the Virtual Paintout for February.  The location this month was San Francisco, with a plethora of possibilities to choose from for painting sites.

While cruising around Golden Gate Park, I came across the Hagiwara Tea Garden, a very lovely spot.  This doesn’t do it justice but I think it gives the feeling of a peaceful Japanese setting.

Here’s my second entry into this month’s Virtual Paintout for February.  I thought I’d better get on the stick because the month is fast disappearing.

This one I call “The Kibitzer” because it looks like the elephant is reading over the woman’s shoulder.

I found this scene at 704 Bridgeway in Sausalito, across the Bay from San Francisco.  I went to Sausalito in (what seems like a millennia ago now!) the late 70’s with my husband not too long before we were married.  He had grown up in S.F. and I had only visited it briefly, so this was a great introduction to the area.  We took a ferry over to Sausalito and enjoyed walking around the town and peering into the shops.  A very pretty locale.

So, the Virtual Paintout for the month of February is the San Francisco bay area.  What a lot of opportunities there are there!  Bill Guffey (the genius mastermind behind Virtual Paintout) has drawn the boundaries from Santa Rosa in the north, to San Jose in the south and east to Antioch.  That is a lot of territory in which to find subjects to paint and draw!

That being said, I knew exactly where to find my first location:

48 Grattan St. in the city of San Franciso.

This is where my husband and his two brothers and their mother lived.  The house is a three story “flat,” and the family lived on the third floor while his grandparents lived below them and were the owners.

I did the painting from Google street view showing how the house looks today.  But as a twist, I included a drawing from a snapshot of my husband and his family out in front of the house on Easter Sunday in 1952.  (There is actually more of the house next door showing in the snapshot, with its arches and columns.)

My husband was amazed at the size of the trees on this street now.  When he was living there, the street had few trees and the ones that were there were quite small.  What a difference almost sixty years can make! 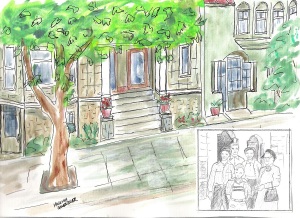 I decided to do one final (yeah, I know, you’ve heard that one before) entry to the Virtual Paintout for January, located on the beautiful island of Corsica.

I wanted to have some fun with this one and not angst over it too much (yeah, sure, like that’s going to happen!) so I did this one rather quickly while my grandkids were here watching some cartoons and having their weekly dose of Fruity Pebbles and Cocoa Pebbles.  (Am I a swell grandma or what?)

This one is 4 Boulevard Albert, Ajaccio, Southern Corsica.  There were no people around to include in the picture, so I naughtily put Mr. Peg Man from Google street view search in front of the house.  I thought he could be kind of like the Roaming Gnome in those travel ads.  Maybe I’ll include him in other paintings in the future–I might hide him like Waldo for people to find.  hee hee  So, click on the image to enlarge it and, by all means, click on the above link to view the many wonderful entries for this month.  What will February bring us for the new location?  Stay tuned….

Since I’ve sworn off politics, I’ve found that it had been a huge time suck in my life.  I spent way too much time checking in on Huffpost, Politics Daily, Politico and the like when I could have been doing something more productive—like plucking my eyebrows or flossing my teeth.

That being said, since I have more time on my hands now, I had no excuse not to do another entry for the Virtual Paintout for January, located in lovely Corsica this month.

Ever since I’ve been doing these I thought it would be fun to paint people waiting at a bus stop and was always on the lookout for some interesting characters.  I happened upon a couple of ladies at a bus shelter at 10 Cours Napoleon, Ajaccio, Corsica  and although I’m sure I haven’t done them justice, at least I’ve gotten my bus stop fixation out my system for now.  haha

Click on the image for an enlarged view, and be sure to click on the link above to visit the Virtual Paintout site to see all the amazing art from other artists from around the world who have met “virtually” to paint Corsica this month.